What is BioMagnetic Therapy?

The use of magnets as a medical device goes back centuries, maybe even to the ancient Aztecs of Central America.

In the 14th century, Paracelsus, a physician and alchemist, claimed that steel magnets could attract diseases out of the body, and help draw them to the surface where they could be removed.

The Ancient Greeks discovered lodestone which is considered by many to be the very first natural magnet. Hippocrates, the father of modern medicine, discussed the use of magnets in his healing protocols.

An American who became interested in magnetic healing, Daniel David Palmer, opened Palmer’s School of Magnetic Cure in Iowa in the 1890s. His ideas developed into the system of hands-on therapy known today as chiropractic.

While Magnets are used in complex medical imaging procedures – such as Magnetic Resonance Imaging (MRI), which uses magnetic fields to formulate 3-D images of the brain and electroencephalographs (EEG), which look at the electrical activity of the brain –  to better understand the body, and magnets are used as a healing therapy throughout many areas of Europe and Asia, the therapy has not been accepted by the traditional medical community in many countries.

Biomagnetic therapy is a natural treatment modality that helps to balance the body’s cellular milieu by optimizing pH levels within the organism.

The therapy is unique in that it utilises pairs of magnets of opposite charges in order to depolarize the areas where a pathogenic imbalance occurs and re-establish a more balanced biological terrain.

In order to function optimally, cells within the body need a proper environment that is based on a balance of positive and negative ions. This balance determines the pH level within the organ tissues. 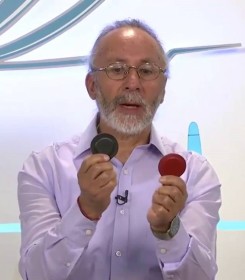 Dr. Isaac Goiz of Mexico first developed this technique in 1988 when he clinically defined the location of biomagnetic pairs where pH disturbances occur as a result of infection from common pathogens including viruses, bacteria, fungus, parasites and other toxins.

The idea of healing with magnets travelled through time on the backs of many more free-thinking physicians and scholars, all the way up to the 1997 study at the Baylor College of Medicine, which concluded permanent magnets reduce pain in post-polio patients.

Today, those who believe in the efficacy of magnetic therapy often cite the ability of static magnets to alter a person’s bioenergetic fields, or biofields, which are “energy fields that purportedly surround and penetrate the human body,” according to the American Congress of Obstetricians and Gynecologists.

Practitioners of certain alternative medical techniques may refer to this alleged bioenergetic field as life force, chi or energy flow. Some believe that such fields can be manipulated — sometimes using magnets — to treat illness or injury

There is no irrefutable proof that magnets have any effect on cancer; it does nothing to reduce the size or frequency of tumours, or to kill cancerous cells. However, the possible use of biomagnets to relieve pain makes them a very popular alternative medicine method.

Contraindications to using magnets include pregnant women, individuals with pacemakers and individuals who are haemorrhaging.

Please note that the Little Fighters Cancer Trust shares information regarding various types of cancer treatments on this blog merely for informational use.

LFCT does not endorse or promote any specific cancer treatments – we believe that the public should be informed but that the option is theirs to take as to what treatments are to be used.

Always consult your medical practitioner prior to taking any other medication, natural or otherwise.

CHILDHOOD CANCER and CHILDHOOD CANCER AWARENESS Little Fighters Cancer Trust is a non-profit Childhood Cancer support organisation that offers support and aid to Children with Cancer and their families. When a child is diagnosed with cancer it affects the whole family. One of the parents, usually the mother, must give up their job to care for the child and this creates financial problems for the family. In South Africa especially the majority of these families are not well-to-do; many of them are rural. A diagnosis of cancer can wipe out any family’s finances, let alone a poor family. The costs of special medications, special diets, hospital stays, transport to and from the hospital or clinic and accommodation and food costs for the mother who spends most of the time at her child’s bedside are astronomical. These are the people and problems that fall through the cracks, and these are the people that Little Fighters Cancer Trust has pledged to help in any way possible. LFCT takes a holistic approach to assisting the Children with Cancer and their Families, with the main aim to be the preservation of individual dignity and pride. Little Fighters Cancer Trust also focuses on promotion and advocacy of National Childhood Cancer Awareness in an effort to increase awareness of Early Warning Signs of Childhood Cancer. This would result in earlier diagnosis, giving the Child with Cancer more of a chance at Treatment and Survival. See "About" for more Background info
View all posts by LFCT »

This site uses Akismet to reduce spam. Learn how your comment data is processed.

Blogging to keep myself sane throughout my cancer diagnosis.