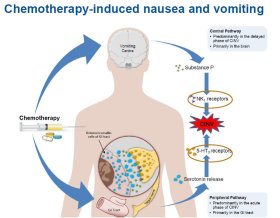 Chemotherapy-induced nausea and vomiting (CINV) is a common — and often costly — problem among patients with cancer.

If you are the parent of a Child with Cancer then you are used to CINV and know how it ravages a child already weakened by the cancer itself as well as cancer treatments such as Chemotherapy.

According to a recent study in which 37,730 reports of hospitalisation due to

nausea and vomiting that occurred during 2014, and which was presented at the 2017 Palliative and Supportive Care in Oncology Symposium, the average amount paid by insurers for each CINV-related hospitalisation is more than $15,000.

According to the authors of the study, “This economic impact, in addition to the consequences for patients’ quality of life, suggests the need for continued advances in preventing CINV and optimizing compliance with national antiemetic guidelines, particularly for chemotherapy with high emetogenic potential.”

“Surprisingly, the adherence to evidence-based guidelines is poor with approximately half of institutions not implementing the proper CINV prophylactic strategies,” he said. 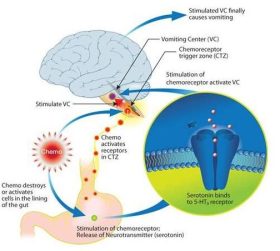 Roeland hopes that research will continue to advance in the field of CINV, particularly in assessing who is at a higher risk for the effect, as well as implementing and standardising treatment protocols that can take people from having less nausea and vomiting to having none at all.

“Further research is needed to identify the specific levels on compliance with guidelines and steps are needed to help streamline medical professionals’ ability to comply with the guidelines,” he said. “In addition, more monitoring of patient symptoms between office visits would help build awareness of the actual rate of CINV events, which would help avoid recurrence and hopefully reinforce the need for guideline compliance.”

What You Can Do for your Child with CINV

Fortunately, if your Child with Cancer is suffering from CINV, there are various steps that you can take to help them:

a) Once the vomiting is under control, give him or her small amounts of clear liquids such as water, a thin stock soup, milk-free ice lollies, and gelatine desserts

b) Start with 1 teaspoon every 10 minutes and gradually increase the amount to 1 tablespoon every 20 minutes. Work up to 2 tablespoonfuls every 30 minutes

c) When your child can keep down clear liquids, try denser liquids such as strained cereal, pudding, yoghurt, milkshakes, and cream soups

d) Give small amounts as often as your child can keep them down, and gradually work up to solid foods

CHILDHOOD CANCER and CHILDHOOD CANCER AWARENESS Little Fighters Cancer Trust is a non-profit Childhood Cancer support organisation that offers support and aid to Children with Cancer and their families. When a child is diagnosed with cancer it affects the whole family. One of the parents, usually the mother, must give up their job to care for the child and this creates financial problems for the family. In South Africa especially the majority of these families are not well-to-do; many of them are rural. A diagnosis of cancer can wipe out any family’s finances, let alone a poor family. The costs of special medications, special diets, hospital stays, transport to and from the hospital or clinic and accommodation and food costs for the mother who spends most of the time at her child’s bedside are astronomical. These are the people and problems that fall through the cracks, and these are the people that Little Fighters Cancer Trust has pledged to help in any way possible. LFCT takes a holistic approach to assisting the Children with Cancer and their Families, with the main aim to be the preservation of individual dignity and pride. Little Fighters Cancer Trust also focuses on promotion and advocacy of National Childhood Cancer Awareness in an effort to increase awareness of Early Warning Signs of Childhood Cancer. This would result in earlier diagnosis, giving the Child with Cancer more of a chance at Treatment and Survival. See "About" for more Background info
View all posts by LFCT »

This site uses Akismet to reduce spam. Learn how your comment data is processed.

Blogging to keep myself sane throughout my cancer diagnosis.